As car accident attorneys, we know that working people in the United States simply do not get enough sleep. About fifteen percent of the adults in the United States could be described as “insomniacs,” but more than one in three of us have trouble sleeping at least once a week, according to the National Sleep Foundation. While sufficient sleep is essential to good health, insomnia poses a more immediate risk to all of us – personal injury. In fact, drowsy driving is responsible for thousands of fatalities each year in traffic collisions that cost the nation more than $100 billion annually, according to figures released in August by the Governors Highway Safety Association.

Drowsiness behind the wheel doesn’t garner the attention given to drunk driving and distracted driving. Diagnosing insomnia as the cause of any particular wreck is difficult. When someone dies crashing his or her car into a tree, and no alcohol or drugs were involved, was drowsiness the cause? It’s impossible to know. Investigating police officers identified drowsiness as the cause of at least 72,000 traffic accidents from 2009 through 2013, according to National Highway Traffic Safety Administration (NHTSA). Those collisions resulted in about 41,000 injuries and 800 fatalities. 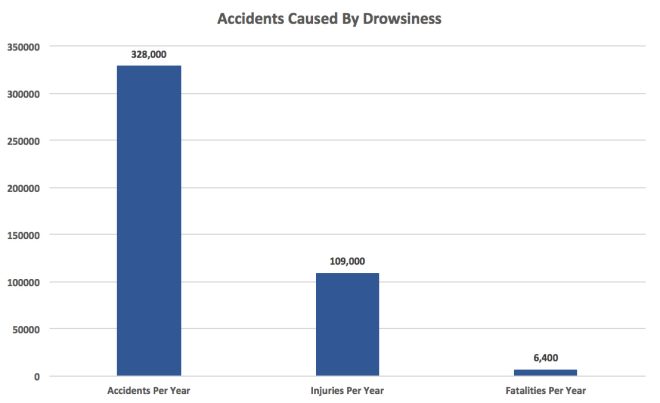 The AAA Foundation reports substantially different figures. AAA estimates that drowsiness causes about 328,000 accidents a year, with approximately 109,000 injuries and about 6,400 fatalities. The wide statistical differences between the two reports point to the difficulty of assigning insomnia as the cause of any particular crash. But in the end, the NHTSA and AAA figures send one powerful message – insomnia behind the wheel is dangerous and often deadly. Dr. W. David Brown, who is board certified in behavioral sleep medicine, says, “Falling asleep while driving is a near-death and near-homicidal experience. It must be treated that seriously.”

WHAT’S THE SOLUTION TO DROWSY DRIVING?

Registered nurse and certified clinical sleep educator Terry Cralle says that one problem with drowsy driving is the way we speak about it: “I hate the term drowsy driving – it’s too benign and does nothing to convey the seriousness, the harm and heartbreak that drowsy driving causes. I have seen too many broken bones and lives shattered as a result of drowsy driving. It’s deadly but very few people understand the seriousness of this problem.”

Cralle adds that “People are under the misconception that they can turn up the radio or open the window to stay awake while driving – and that is simply not the case. Drowsy driving continues to fail to get the attention it warrants – and it’s simply too dangerous to continue to languish as a non-issue when it comes to our collective health, safety and well-being.”

Pam Fischer is a former New Jersey highway safety official who wrote the report released in August by the Governors Highway Safety Association. Titled “Wake Up Call! Understanding Drowsy Driving and What States Can Do About It,” the report runs to 73 pages. Ms. Fischer told USA Today, “Drowsy driving is more pervasive than we recognize, more commonplace and we’re all guilty of it. And we have the ability to correct it. The fix is simple: Get more sleep.”

When asked, Modesto personal injury lawyer Jeffrey Nadrich says “the risks of drowsy driving are quite similar to the risks of intoxicated driving”. Insomnia and alcohol both lead to a slower reaction time, slower thinking processes, and the possibility of nodding off while behind the wheel. The average driver, when awake for twenty-one straight hours, will drive in a manner comparable to someone with a blood alcohol content level of 0.08 percent, the definition of intoxicated driving. Dr. W. David Brown says, “In many ways, the sleepy driver is more dangerous than the drunk driver. The drunk driver has an impaired perception of the environment. The asleep driver has no perception of the environment.”

Dr. Brown explains what happens to the drowsy driver: “When sleep deprived, individuals begin to experience micro sleeps. You have seen someone in a micro sleep. You may be talking to them and their eyes may be open, but you know no one is home. A micro sleep occurs before the head bobs or the eyes close. During a micro sleep, the individual is cut off from the environment. Traveling 60 miles an hour with a 5-degree deflection, it takes only seconds to go off the road.”

Everyone knows what the basic symptoms of insomnia are: fatigue, reduced cognitive function, irritability, and sleepiness through the day. Insomnia puts its sufferers at risk for heart problems, respiratory disorders, cardiovascular disease, arthritis, allergies, obesity, diabetes, digestive problems, severe headaches, and more. But if you suffer from insomnia, it may not have occurred to you that insomnia increases your chances of sustaining – or causing – a severe personal injury.

Without sufficient sleep, and especially as we get older, our health will suffer. And while insomnia tends to be associated with older drivers, everyone’s at risk. Dr. Brown writes, “My study showed that 17% of teens have already fallen asleep at least once while driving. These teens had only been driving for one year.” If you’re injured in traffic in the greater Chicago area because another driver was fatigued or asleep behind the wheel, an experienced Chicago personal injury attorney may be able to help you recover reimbursement for your medical costs and your other injury-related losses.

Drowsy driving continues to be the leading cause of traffic collisions involving large commercial trucks. You almost certainly know about the June 2014 tragedy on the New Jersey Turnpike that seriously injured television star Tracy Morgan and killed his friend, comedian James McNair. A Wal-Mart truck rear-ended the limousine that the two were riding in because the truck driver was fatigued, according to the National Transportation Safety Board (NTSB). The Wal-Mart driver had been behind the wheel for more than 25 hours at the time of the crash, according to the lawsuit filed by Mr. Morgan’s attorneys.

In 2011, fifteen passengers died when the bus they were riding from Connecticut to New York crossed a paved shoulder, hit a guard rail, and skidded more than 500 feet. The National Transportation Safety Board determined that the catastrophe was caused by a “perfect storm” of sleep deprivation and speed. The driver “was impaired by fatigue at the time of the accident due to sleep deprivation, poor sleep quality and circadian factors,” according to the NTSB report.

WHO IS GUILTY OF DROWSY DRIVING?

Unlike driving under the influence of alcohol or drugs, there is no way to test definitively for driver fatigue. Also unlike intoxicated driving, drowsy driving is far too common because, quite honestly, almost all of us have done it. According to a AAA Foundation survey conducted in 2015, nearly a third (31.5 percent) of all drivers admitted driving at least once during the previous month while fatigued.

Only two states have adopted laws that specifically penalize fatigued drivers who cause an injury or fatality. A New Jersey law passed in 2003 applies to reckless drivers who go sleepless for 24 hours or more, and a similar law was adopted in Arkansas in 2013. Some states are financing educational programs; others are considering new laws with criminal penalties, according to the National Conference of State Legislatures. Of course, fatigued drivers can be held accountable in civil court when they injure others. In Illinois, anyone who is injured by another person’s negligence can file a personal injury claim with help from a Chicago personal injury attorney.

Even if you don’t have a problem with insomnia, it’s imperative to develop good sleep habits and to be alert when driving. The Federal Motor Carrier Safety Administration provides the following alertness suggestions for truck drivers, but all of us can benefit from the recommendations:

The National Institutes of Health offer several additional suggestions. Avoid exercise and caffeine before going to bed, and have a comfortable place to sleep. “We all have the potential to be drowsy,” says Pam Fischer. “Not everybody drinks. Not everybody is distracted by cell phones. But everybody has the potential to do this. We have the ability to do something about this.”

If your insomnia is serious and persistent, Brandon Giegling, the President of Parkway SleepHealth Centers, suggests seeking professional help: “When we lack sleep our decision making, response time, and our overall performance is less than optimum. When we are sleep-deprived it has a large impact on our driving capabilities, almost to the level of driving while under the influence of alcohol. People who have missed increased hours of sleep are between 2 and 20 times more likely to get in a crash than a well-rested driver. Sleep deprivation is a serious issue that should be discussed with a sleep specialist.”

What is considered medical malpractice in Illinois?

The Differences Between Elder Abuse vs. Neglect

What Should I Know Before Filing a FELA Lawsuit in Chicago?

Previous PostCan a passenger recover damages for injuries caused by the other driver?Next PostHow difficult will it be to win my Illinois nursing home abuse case?
0Shares